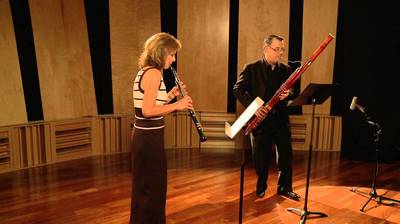 ​Oboist Nancy Ambrose King and Bassoonist Jeffrey Lyman have performed together as the King-Lyman Duo since 2005. Both Professors at the University of Michigan, they have recorded, commissioned, and premiered numerous works since then. They commissioned John Steinmetz's 'Songs and Dances' for Oboe and Bassoon, as well as the world premiere of Chun-Wai Wong’s A Breath of Life. They were featured in one of the first performances of Dirk-Michael Kirsch's Concertino for Oboe, Bassoon and Orchestra in Tokyo at the Conference of the International Double Reed Society. Their YouTube channel, Katz-King-Lyman features Duos and Trios by Poulenc, Grandval, Planel, Jolivet, and Villa Lobos. They also appear in Duos by Steinmetz and Paganini on Youtube. They are featured in Jeffrey Lyman's CD El Bajón en México and Both Professors at the University of Michigan School of Music, Theatre & Dance, Drs. King and Lyman are widely respected soloists as well as chamber musicians, who bring their interest in expanding and promoting the repertoire for oboe and bassoon to the King-Lyman Duo.​ 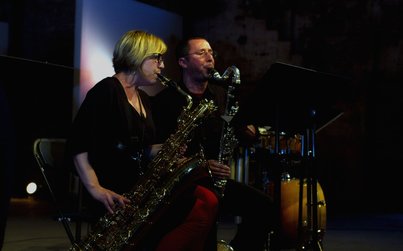 Faculty colleagues at Georgia State University, saxophonist Jan Berry Baker and clarinetist Kenneth Long formed Citizens of Nowhere in 2011. They have commissioned numerous works for saxophone and clarinet, including Mischief (Goldstein), Citizens of Nowhere (Demos), and Ragahoro Breakdown (Wanamaker) and have given performances across the US and Mexico of the works recorded on their debut CD, Citizens of Nowhere (Albany). Jan Berry Baker, an advocate of new music, is Co-Artistic Director and saxophonist with Atlanta new music ensemble Bent Frequency. She regularly performs with the Lyric Opera of Chicago, Grant Park Orchestra in Chicago, Chicago Philharmonic, and Atlanta Opera and can be heard on recordings with the Grant Park Orchestra, Atlanta Opera, and on her most recent CD, Diamorpha (Centaur) with the Bent Frequency Duo Project. She is an endorsed Selmer Paris and Vandoren performing artist. Kenneth Long is associate professor of clarinet at Georgia State University and principal clarinetist of the Atlanta-based contemporary ensemble Bent Frequency and the Atlanta Chamber Winds. Dr. Long has performed 13 seasons with the Utah Festival Opera and performs frequently with the Atlanta Symphony and Ballet Orchestras. He can be heard on the Albany, Aucourant, and Summit labels.